We have a new Prime Minister...

On Monday night Malcolm Turnbull fulfilled his ambition (I think he would say destiny) to become Prime Minister of Australia. 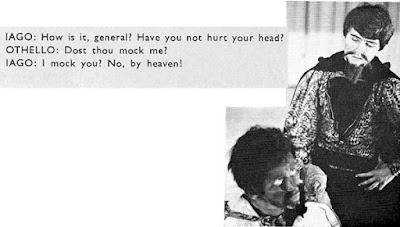 I must admit to being a little astonished about some online commentary from  the tech sector (and one recently tech sector journalist). For the new(ish) online newsletter InnovationAus.com I wrote two columns.

Now writing for Crikey Josh Taylor opined "The area Turnbull had the most interest in, during his time as communications minister, was the digital economy." This is sheer fantasy since his only real DE contribution has been the DTO. As my editor at InnovationAus.com James Riley noted

Prior to the 2013, Malcolm Turnbull had fully expected to be given responsibility for government ICT – to use the power of Commonwealth as the largest buyer and user of technology to drive cultural change across the digital economy. This did not happen, and a series of election promises related to ICT procurement that were made before the 2013 poll did not come about as a result.

In my own contribution, mostly written before the challenge, I noted how the review of the ACMA could create the opportunity for some significant "machinery of Government" reforms. I noted that in his first address the PM had stated his intention to reinvigorate the Government’s policy making in relation to embracing the opportunities that the 21st century has to offer.

The proposed changes would create a Department capable of prosecuting the case. while the Secretary of the Department of Communications, Drew Clarke, is acting as Mr Turnbull's Chief of Staff he will have an ideal opportunity to press this case.

It was in relation to the NBN that commentary became even weirder.

iTwire reported "Internet Australia has called on incoming Prime Minister Malcolm Turnbull to fast track construction of the National Broadband Network, claiming the Abbott Government failed to understand the importance of the Internet."

In a separate story they also reported "Telecoms research group Ovum’s principal government technology analyst believes that Malcolm Turnbull’s appointment as Australia’s Prime Minister will see a change in the fortunes of the NBN, including a faster rollout and shift back towards FttP."

Both of these are simply delusional. Mr Turnbull would claim that his move to the Multi Technology Mix was all about speeding up, and the one thing Mr Turnbull will not cede ground on would be the greater use of FTTP.

Mr Forman said it was more important to make sure services on the NBN remain competitive rather than focus on the technologies used in the network. He added, “This is an opportunity for a higher level of bipartisanship. Both parties agree on the NBN, and the things they disagree on – around technology choices, are really in the past and at the margins.”

These comments are right, it is not now time to re-prosecute the case for a change to an all FTTP deployment. The nation cannot afford the delay. But as I note in my other piece for InnovationAus, Mr Turnbull should not be able to claim his approach to the NBN as an example of good administration.

As I outline the evidence is clear that Mr Turnbull made the decision to change the technology on the basis of a rushed and seriously flawed piece of analysis. Each time he has had to recalibrate the cost of his flawed approach he has costed the FTTP counterfactual. While the cost of his own plan has almost doubled, the costing of the alternative continues to collapse.

Space did not permit me in the article to outline how heroic Mr Turnbull's assumptions are about the ramp up after the 2016 election (see below). 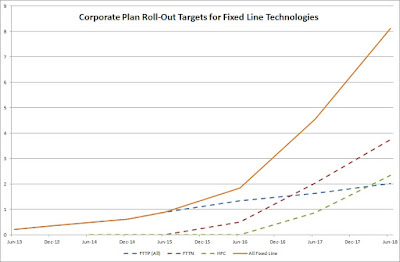 Nor did it permit the hilarious piece of testimony whereby NBN Co's CFO asserted the shift in the HFC deployment had no impact on revenue only to have the committee demonstrate to him the 56% decline in revenue to 2017 between the Strategic Review and the Corporate Plan.

Nor did I have space for a long exposition on the subject of "transparency." Having declared he is being more transparent and just publishing a weekly rollout progress, Mr Turnbull is credited with more transparency even though there is actually less. The latest example is the latest Corporate Plan that only provides information to on revenue, costs and rollout to 2018 - the minimal legislative requirement. The plans released in 2010 and 2012 gave full profiles to the end of rollout and data points for 2028 (self-financing) and 2040 (life for Discounted Cash Flow analysis).

Here we are two years into the implementation of Mr Turnbull’s plan and everything he said about it in 2013 is now in tatters. Mr Turnbull’s “evidence” about the NBN is no less manufactured than Godwin Grech’s evidence in Utegate. Yet Mr Turnbull wasn’t sacked by Mr Abbott, it happened the other way around.

Those who follow the NBN could believe that Mr Turnbull’s rush to bring on the leadership challenge was motivated by the need to move before his NBN debacle caught up with him.

It takes the special kind of person that Mr Turnbull is to instead use his management of the NBN as a template for governing the country.

To be moved by the full force of Othello’s tragedy the audience must believe in an Iago hell-bent on revenge against Othello; a revenge motivated by pique at being overlooked for promotion. Although always careful to conceal his true character in the presence of others, Iago’s revenge becomes an obsession taken to the point of paranoia….

With a voice of rich quality, M. B. Turnbull spoke the poetry with clarity, although his soliloquies needed to be less mellifluous and more varied. In voice and commanding presence, he showed he possesses the resources to have given a believable performance as Iago, had he acted with less artifice and more spontaneity. On the one occasion when he dropped to a quieter, more natural tone in the “not poppy, nor mandragora” speech, and became a credible character, he showed how genuinely chilling his performance might have been.

The review is only accredited to N.G.S. – I have no idea who that was.


Posted by David Havyatt at 5:06 PM No comments:

It is now very nearly two years since the last Federal election. In the week just passed the Prime Minister cancelled a scheduled Cabinet meeting that despite reports to the contrary did actually have items on the agenda. He went bush to revere the grave of Eddie Mabo - the man responsible for winning a court case under British common law that found there was such a thing as native title, a thing the Coalition opposition at the time claimed would make no one's home safe.

Two years ago on the morning after the election, Andrew Robb (then Finance spokesman) announced on ABC's Insiders

The minority government - there was no sense of direction, you know people felt there was no-one in charge, we're heading different directions every week in response to the Greens' demands and the crossbenchers and all the rest. So it led to a situation where Australia's been on hold for 12 months now. We are open for business I can tell you.

As of today the mining boom will be rebooted, right. Under Labor it was finished because of the cost uncompetitiveness that we now have. We will change that. There's $150 billion worth of projects there to be grabbed. We can do so much. We can get Australia open for business. We'll restore an appetite for risk and investment, people's jobs will grow massively. Small business will come out from under the huge shadow that they've had for the last two years.

The Prime Minister stayed in the Northern Territory while the National Reform Summit was held. Here's a question - if Cabinet had been scheduled then cancelled when did the PM decide to be away that week? Was it before or after the date for the summit was announced.

In her closing remarks to the summit BCA CEO Jennifer Westacott declared "We will not stand by and have the next election be a race to the bottom of the things politicians will not do."

But there's the rub - because that is certainly all this Government promises; it is all it has ever promised. This is the government that believes in small government - led by a Prime Minister who is fundamentally caught in a contradiction. As I wrote previously "He dislikes Government and so really doesn't know what to do when in charge of one."

The embarrassing thing for the business community is that they backed this horse in. The over the top campaign on the mining tax was the start of it. The incredibly conflicted position on carbon - demanding that Government provide certainty for investment and then attacking the tax once it was implemented perpetuated it.

Tax reform has become a laughing stock. More things have been ruled out than in, the GST is touted as a way to close the $50 billion funding cut to state health and education budgets, yet kind uncle Joe wants tax cuts. Uncle Joe's speech last Monday was decried as the greatest embarrassment, conflating as it did bracket creep and high tax rats at the top.

Every time he opens his mouth Joe makes the case to reduce the tax burden on the richest Australians.

And so the Prime Minister plays the national security card - some research somewhere tells him that its the economy and national security that the conservatives are traditionally strong on. At great pains to stability inside the ALP Bill Shorten refuses to bite.

Even last weekend when the Operation Fortitude media release first made the airwaves Bill was vaguely supportive of the plans to enforce immigration laws. It was only once the nonsense had collapsed that he was more strident.

So some well intentioned media adviser wrote a release designed to make it sound more dramatic, that the ABF would be pounding the pavement to keep Melbournians safe. Only a fool wouldn't realise that this sounded like a regime in which everyone had to cover their papers for presentation to the police - name your undemocratic state of choice for a comparison.

Then it transpires that the fool wasn't the guy who drafted it, but a guy in the Minister's office. The release was sent up first on Wednesday and not opened. Concerned he'd had no reply the officer sent it back up on Thursday, at which point he got approval.

Well he's wrong. Because the problem never was the operation that the ABF planned to be part of nor its role in it. The problem was the ham fisted attempt at politicising national security that was approved by the executive.

As a Labor man there is nothing I want more than Tony Abbott to stay PM right up to the next election. But as an Australian I simply don't think the country can afford another year of ineptitude on this scale.

Dutton, Hockey and Abbott - and probably Robb as well - need to be pensioned off by their party. Some of their junior ministers and parliamentary secretaries are more suited to their seats at the Cabinet table. And take your pick between Turnbull, Morrison or Bishop (J) - any one of them is a Poirot compared to Abbott's Inspector Clouseau.

Posted by David Havyatt at 12:57 AM No comments: