Further prof that Anthony Abbott is not fit for leadership

Today's Oz carries a story  that a new coalition ginger group calling itself the Monash Forum has been formed to promote government support for a new coal fired power station. 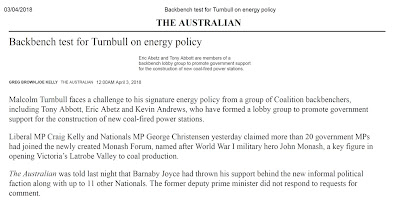 This is simply absurd on so many levels.

Firstly Abbott was Prime Minister when Australia agreed to the Paris Accord to limit global temperature increase to two degrees. There is no escaping that the achievement of that goal requires zero emissions from electricity generation by 2050, especially in advanced economies.

The emphasis on advanced economies reflects the fact that we are the ones responsible for most of the existing greenhouse emissions - we have a responsibility to get our emissions down faster.

The second is that I don't know where these blokes (only males mentioned in the story) think this plant should be built. But wherever it is it makes interesting calls on transmission planning.

The third is the misuse of Monash's name. He was the first Chairman of the State Electricity Commission of Victoria who implemented the plan to use Victorian brown coal. But he wasn't an instigator.

He is most notable for his 1924 Presidential address to the Australasian Association for the Advancement of Science in which he extolled the benefits of 'linking up the system.' At that stage it was the linking up of just Victoria but his speech referred to a continental ambition. That continental ambition in 1998 became the National Electricity Market.

A key motivator for the NEM development was to provide the opportunity for private sector investment in generation. That was further supported by the sale of most of the government owned generators.  Despite opinions to the contrary that system is working, though currently at much tighter margins between capacity and peak demand.

The fourth is that this is all about base politics and not about policy.

The Oz story reports One member of the new group said: “Some of us see ­energy as being the only ticket to ride in the next election and the NEG is clearly not going to cut it for us.”

But fear of electoral defeat is not the only politics being played here (and it is certainly unclear that backing coal is an electoral winner). This is about the Liberal Party leadership - nothing more nothing less.

The fact that it is the Oz and News Corpse (as Mike Carlton calls it) tabloids running with the story tells you all you need to know.

Meanwhile the SMH had a great little piece about how politics is changing. Voters descriptions of themselves show the proportion on the right hasn't changed, while the proportion in the centre has contracted with a real growth in the left. 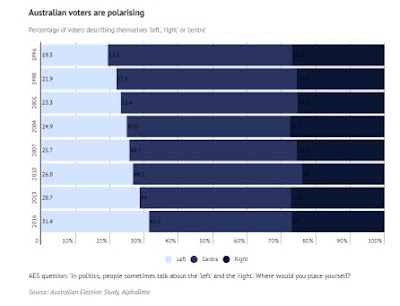 This, not Turnbull, is the existential threat the right needs to deal with.
Posted by David Havyatt at 2:04 PM No comments: