I just can't get enough of KKK doing the Coalition over on the EV scare campaign....

What about the Climate Change Authority?

Alan Kohler in the Oz has written a piece that concludes:

It seems to me the best way to achieve that, given the apparent seriousness of the situation, would be an independent body, a bit like an expert, permanent royal commission, made up of a cross-section of scientists, statisticians and economists, to pull together the data and advise the government.

It can’t be left to the Environment Department, the CSIRO or the Bureau of Meteorology because they are either not independent or not broad enough, although they should be represented on it of course.

The aim would not be to try to convince people like Barnaby Joyce, Angus Taylor, Maurice Newman and Terry McCrann, or catastrophists at the other end of the spectrum, but to come up with the most likely impact of global warming on Australia and a set of recommendations and costings for dealing with it and to do it publicly.

He links to a website called Climate Change in Australia run by the aforementioned bodies.

What he seems to have forgotten is that the Climate Change Authority was established in 2011 for exactly this purpose. The Explanatory Memorandum to the Bill establishing the authority states:

The Government will remain responsible for carbon pricing policy decisions.

The authority was rocked with turmoil when Tony Abbott tried to abolish it and subsequently lost a number of Board members (see also this and this). It is constituted to have a Board composed of a Chair, the Chief Scientist and up to seven others - it currently only has three others. It continues to be funded but the 2019-20 portfolio budget statements show (p. 199 ff) the Authorities expenditure to be basically constant at $1.5 million per year and a staff of nine. This should be contrasted with the $252 million in Government advertising, including $5 million expected in the last week of the campaign.
Six million dollars is a reasonable estimate for the "Make the Call" campaign under powering forward alone - that is the same as the Government is prepared to spend on independent expert advice on climate change mitigation. 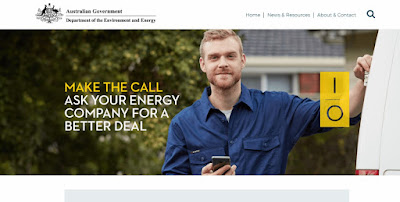 Labor's policy commits to $17.4 million funding over the forward estimates to, in its words, 'reverse the Government’s abolition of the Climate Change Authority and ensure that it continues to be appropriately resourced to achieve its role.' (This number comes from the FactSheet - the Policy Document says $24 million).

Maybe Alan Kohler would like to revisit his column and just say - Vote Labor.

I made a big mistake this week. I decided to correct Chris Kenny on Twitter about the speed at which an electric vehicle (an EV) could charge. Of course I then uncovered a few crazies.

At the same time I have been thinking about how successful the Government has been in peddling the line that our "Paris commitment' is a 26-28% reduction in greenhouse gas emissions by 2030 on 2005 levels. Even the bulk of last week's Four Corners only got around to the interviewees explaining the agreement at the end of the show.

So let's just recap for everybody.

This Agreement, in enhancing the implementation of the Convention, including its objective, aims to strengthen the global response to the threat of climate change, in the context of sustainable development and efforts to eradicate poverty, including by:
(a) Holding the increase in the global average temperature to well below 2°C above pre-industrial levels and pursuing efforts to limit the temperature increase to 1.5°C above pre-industrial levels, recognizing that this would significantly reduce the risks and impacts of climate change;
(b) Increasing the ability to adapt to the adverse impacts of climate change and foster climate resilience and low greenhouse gas emissions development, in a manner that does not threaten food production; and
(c) Making finance flows consistent with a pathway towards low greenhouse gas emissions and climate-resilient development.

The 'Convention' referred to is the United Nations Framework Convention on Climate Change, adopted in New York on 9 May 1992. The Objective of the Convention is:

The ultimate objective of this Convention and any related legal instruments that the Conference of the Parties may adopt is to achieve, in accordance with the relevant provisions of the Convention, stabilization of greenhouse gas concentrations in the atmosphere at a level that would prevent dangerous anthropogenic interference with the climate system. Such a level should be achieved within a time frame sufficient to allow ecosystems to adapt naturally to climate change, to ensure that food production is not threatened and to enable economic development to proceed in a sustainable manner.

The primary mechanism by which the agreement 'aims to strengthen the response to the threat of climate change' is a series of 'nationally determined contributions' to the global response to climate change, and all Parties are to undertake and communicate ambitious efforts as with the view to achieving the purpose of this Agreement as set out in Article 2. The efforts of all Parties will represent a progression over time, while recognizing the need to support developing country Parties for the effective implementation of this Agreement.

The proposed support for developing countries is outlined in Articles 8, 9 and 10. Taken together these include direct financial assistance, technology development and transfer and capacity building.

The 26-28 percent 'Paris commitment' is merely our first nationally determined contribution (NDC). Our next one is due to be delivered to the UNFCCC in 2020. No one seems to ever ask the Government what it is planning for this NDC.

The current assessments of the carbon budget requirements to reach the goal of 2 degrees basically requires global energy systems to be net zero emitting by 2050.

Now the set of commentators who object to action on climate change usually have one of three core arguments:

The simplest case for sticking with the decision to take action is based on a risk assessment. If the theory is correct and the consequences as catastrophic as thought, then inaction is massively punishing on the planet and mankind. The real sting is that by the time the evidence became totally incontrovertible nothing could be done about it.

The second good reason is that we know fossil fuels are not in infinite supply. While the earlier forecasts for things like peak oil have been thwarted by new discoveries and new technologies, this can't go on forever. At some point we have to make a change to renewables and because of the climate risk it makes most sense to do it now.

The second objection is the real killer. The realities are that Australia's share might well be less than 1.3% (the Kenny number). Sources I have for 2016 suggest our share is lower at 1.14% but we are still the 16th highest emitter (and twelfth highest per capita). More importantly the cumulative total of all those smaller than our emissions is 24%. So if we should take no action the logic would suggest a quarter of the planet shouldn't.

But wait you here the objectors - developing countries aren't being required to contribute at all yet. But the first three countries behind us are the UK, France and Italy. And only six countries have a share of greater than 2% (Germany, Japan, Russia, India, United States and China.)

Now we come to the third objection, there is no way to reduce emissions without wrecking the economy. For this the objectors use some inaccurate claims about how renewables can and do work in the electricity supply, and ignore some important technology developments.

But the best way to ensure the transition can be done in a way that supports the economy is to plan for it. That is what we need to do.

The challenge confronted by a plan to net zero (energy) emissions by 2050 is formidable. It requires the complete replacement of coal, gas and oil as primary fuel sources and their complete replacement with renewables. Our choices in Australia are limited to wind and solar - we don't have appreciable un-utilised hydro opportunities (though we do for pumped hydro as storage). Solar can be PV in small (rooftop) or large scale, and can be solar thermal.

To replace all the fuel sources this needs to generate about three times the amount of energy that we currently consume from the electricity grid, probably more to allow for conversion losses from storage. Said like this it sounds like an impossible transition.

Four surveys published in the last half of 2018* provide a consistent picture that a majority of Australians believe that the Earth is warming and that this is a result of human activity.  (Essential 63%, Australian Beliefs towards Science 55%, Australia Institute 56%)

Australians don’t believe that the move to renewable energy sources is a major cause of higher electricity prices, ranking it behind profiteering, privatisation, policy uncertainty and gas exports. 84% say they support focus on renewables over traditional energy sources.

A majority of Australians believe we should stay in the Paris Agreement. Almost two-thirds agree that Australia should enact a serious policy plan to deliver the commitments it gave in Paris to get to zero net emissions.

No-one of course can develop a plan that will represent exactly what happens over the next three decades. But by developing some credible 'end states' and asking ourselves what would need to occur to get us there we can develop an idea of what are the actions that we need to take to give us any hope.

The work I think involves four main components. The first is identifying the optimal distribution of large and small scale generation to reach the ambitious goal and to plan for a 'system' (or grid) to support that. The second is an EV plan. The third is a hydrogen plan. And the fourth is an international engagement plan to fulfill the commitment to developing countries.

More on these over the next few days.