Let's go down to the shore in boats

Twitter was ablaze with #yachtbanter today when for the second year in a row CEOs were stupid enough to (a) participate in KPMG's boat race and (b) to go on the record at said event about what troubles them in 2018.

To get us in the picture the AFR happily reported:

It was a postcard perfect day at the Sorrento Yacht Club for the 20th Annual Couta Boat Classic in Victoria. A morning shower briefly threatened festivities for Australia's captains of industry but swiftly disappeared like so many bottles of Bouchard Aine and Fils Rose at the race's conclusion. 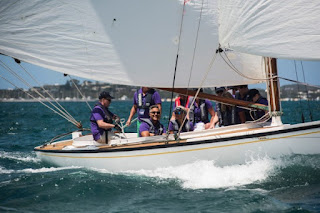 Not content with sharing with all of Australia this picture of largess hosted by one of the 'big four accounting firms' (yes one of those making all the money from the outsourcing of Government policy work) the CEO's titilated us with details of their concerns for 2018. The AFR told us:

Australia's top business leaders have nominated the destructive impact of rising costs on stretched household budgets as one of their key concerns for this year.

Chairmen and chief executives have singled out spiralling energy costs for consumers and business and the impact it threatens to create for the economy as a "must-watch" issue.

One captain of industry decided he should do some serious sucking up to the Prime Minister by blaming it all on State Governments (at least I assume that is the reason for his statement, because as the ACCC price inquiry has shown it has nothing to do with state policies).

Of course, concern for stretched households can only go so far. We were also told:

Rising costs in the form of looming wages growth and the numbers of full-time employees were also front of mind for the banking, hospitality and entertainment sectors.

And there you have it - the sheer idiocy of CEOs informed by a leading accounting firm who can't figure out that the households with 'stretched budgets' are the same things as the workers for whom there might at last be 'wages growth.'

Yes it has been fair enough to pizzle these execs for pontificating from their pontoons. But we miss the real detail - they are all fundamentally idiots who shouldn't be trusted with a couple of bucks to buy an ice cream let alone running major corporations.