Today the Communications Minister announced a plan to bring 'ultrafast broadband' to millions of families and businesses and he welcomed the release of the NBN Co corporate plan demonstrating how this can be financed from the company's internal resources and assume on its own books the debt previously provided by Government. (2)
The recognition that the MTM isn't the ending point seems to have surprised some. But it was always Malcolm and Paul's contention that the most cost effective way to this future was in a two stage build. These upgrades include some fibre to the premises but it also includes the actual deployment of G.fast and HFC upgrades that have been part of the government's and the company's rhetoric for seven years.
We do need to be thankful that the coalition has managed to churn through its leaders though. Tony Abbott may well not yet be convinced that 25 meg is 'more than enough' for any household as he famously declared in April 2013. Malcolm Turnbull may not yet want to admit that the advice he received in his strategic review and cost benefit analysis that higher bandwidths would never be required because of compression was just ex post justification of the MTM by advocates rather than experts.
Let's just revisit some of this. Quoting a report of one of these advocates (Robert Kenny) the Strategic Review (P. 78-9) said:

A recent UK study estimates that the median UK household today requires a maximum download speed of 8Mbps...  By 2023, even as new applications (such as over-the-top video and cloud computing) become more widespread, this is forecast to grow to 19Mbps. This takes account of improvements in compression.

Only a small proportion of consumers in Western countries have so far taken up plans offering greater than 50Mbps (11 percent or less in 2012), and penetration of greater than 50Mbps plans is expected to remain less than 20 percent by 2017 in most Western countries.
At any point in time, there will be consumers willing to pay more for higher speeds.However, consumer research indicates that for the majority, price is the most important factor in selecting a broadband service, and faster broadband speeds have diminishing marginal value.

The review used these arguments to reduce the revenue forecasts included in the NBN plan and hence increase its total funding cost, unfortunately the Strategic Review did not include any detail on the revised expected take up of different speed tiers. Today the Minister announced that 75% of consumers are selecting plans of 50 Mbps or more. Yet the Strategic Review and the counterfactual embedded in it remains the narrative that the media accepts.
It is indeed rewarding to see Fletcher make the announcement. Even though he and I worked together on alternatives to Telstra's 2005 pitch for a regulatory holiday to build FTTN, in his boook Wired Brown Land he argued Australia had no broadband crisis and that it was all only a play by Telstra to get that access holiday. My then new CEO at AAPT Paul Broad (now of Snowy Hydro) shared the fantasy that an FTTN build could be constructed as infrastructure based competition.
COVID-19 has shown us all how much we can do online, why upload speeds are as important as download speeds and that it is easy to have five or more services operating needing high speeds simultaneously. There is no doubt that the experience would have been better had we had FTTP NBN in place everywhere. But the coalition has successfully claimed the space that the true NBN could not be rolled out on time and on budget. Their rhetoric is 'thank goodness for the MTM because it gave us broadband in time for the pandemic.'
My former colleague Andy Byrne (he whose premises were raided by the AFP - remember that) wrote a really great piece for Labor's 2016 election policy that manifestly destroyed the three counterfactuals that had been spun by the coalition about the true cost of the true NBN. These three counterfactuals (their 2013 policty, the strategic review, and the analysis with the first MTM corporate plan) are however what is now believed.
Never mind that had we proceeded with the FTTP rollout the upgrade to gigabit access would have already occurred. The cash flow of NBN Co would now be diverted to extending fibre into areas currently served by fixed wirelees. This was never documented.
The NBN may be unique as being one infrastructure project financed as part of two financial crises. The reason why Conroy had to meet Rudd on a plane in January 2009 to get agreement on the NBN was that Rudd was jetting around the country that way on a speaking tour talking about GFC response (1). Wayne Swan revealed in his book The Good Fight that the NBN was nearly announced as part of the February 2009 statement on additional stimulus. Today Finance Minister Cormann said This is the right time for this network upgrade. There is a long term trend of broadband demand growth – with a very significant spike this year as COVID-19 has changed the way we use the internet. This is a major infrastructure investment which will bring immediate demand stimulation, with some 25,000 new jobs over the next two years.
The really depressing part is the other part of the work Conroy was prosecuting as the Minister for Broadband and the Digital Economy. Labor recognised the need for other work to be developing society and the economy to deliver the full benefits of the investment in broadband. This included, among other things, programs to develop rtele-health and tele-education. When the pandemic hit we saw the government scambling to temporarily introduce telehealth by telephone calls -- we should already be at the point where telehealth by video call is a normal mode of delivery. Students and teachers who had no experience of tele-education were plunged into online resources and hastily developed zoom skills -- how much better if we had developed the ability to join a student from anywhere to a class already, be it for specialist teaching, remoteness or quarantine.
Ignoring the 'why' of broadband of course fitted the coalition narrative that the 'what' of broadband needed to be so much less than Labor's plans.
Finally, lurking online I am continually hearing complaints about NBN Co pricing - which alludes to the comments above about consumer expectations of price. The ABS in its CPI data publishes index numbers for the goods and services that make up the CPI. The data for telecomms has been around since September 1980. The chart below shows the real telecommunications index (telco index/CPI) and for comparison the real electricity and gas indexes. It is an interesting graph. Firstly it shows a steady price decline across four decades in telco prices (the blue trend line). The green trend line is prices from the start of competitive fixed broadband (2000 with declaration of ULL) to September 2013 as the NBN built up speed and the brown trendline is the period post 2013. The rate of price decline has been accelerating under the NBN (and structural separation). 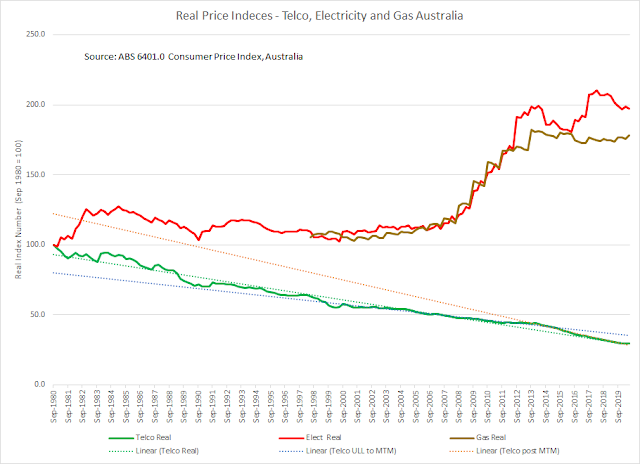 An alternative data source is the ACCC's etail price monitoring. The chart below shows this as two series with 2013-14 set to 100 (the ACCC changed its methodology after the 2015-16 report). 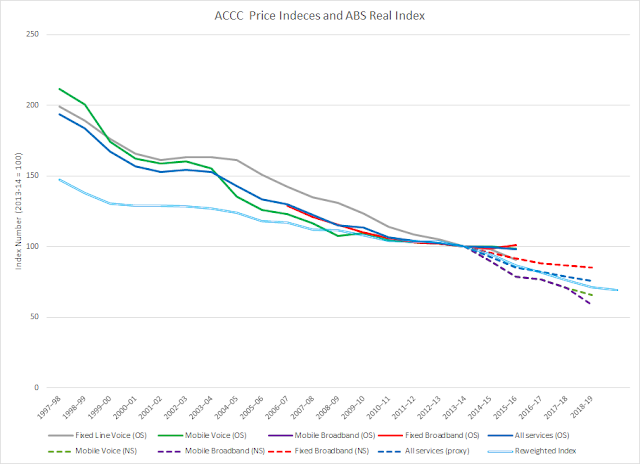 For comparison the double blue line is the ABS index rescaled to make 2013-14 equal 100. Important parts are that fixed broadband series starts in 2006-07, that fixed line voice is now not measured and that mobile has been split between voice and broadband. These also are for all sectors not just households. They reveal that the ABS data is reliable, but that mobile prices continue to decline faster than fixed broadband. This in itself is fascinating because when we were heading to the 4G auctions the talk in telco land was that operators were worried that they couldn't make money out of 4G.
In short, it is pleasing that the Liberal/National government are understanding the signiificance of broadband as national enabling infrastructure. Consumers are doing very well on prices as well. It would be nice if the Morrison government could now address the other programs to further leverage the infrastructure investment


Footnote
1. It is refreshing to hear it again being called NBN Co rather than 'nbn' which was some marketing gurus scheme to rebrand the unrebrandable.
2. The meeting on the plane has been subsequently repeatedly written up as the NBN being crafted on a beer coaster or a napkin on these flights. As the original story (that in the SMH) notes there was nothing of the sort - the Minister was having a perfectly normal discussion with the Prime Minister about the need to take a different policy proposal to cabinet. That is how cabinet works, Ministers can only work up submissions approved by the PM. The actual plan was discussed by the cabinets sub-committee (the gang of four) and full cabinet before announcement. Rudd's movements that week are detaile in John Button's A Year in My Father's Business.
I haven't linked to the various documents housed on my digecon.info website as I am having some DNS issues with it at the moment.
*********************************
Posted by David Havyatt at 3:59 PM